This page contains the following information about ‘No. 6’.

A separate page contains the following information about this appeal.

‘No. 6’ was built in 1935 by R & W Hawthorn Leslie, and it spent its entire working life at APCM's Cement Works in Swanscombe, Kent,  along with six similar locomotives.  Here it hauled chalk from the quarry face to the factory, and loads of cement from the factory both to the main line railway sidings, and to APCM’s wharf on the Thames Estuary.  The picture below shows it when working at Swanscombe, hauling a train of wagons of chalk past the tippler. 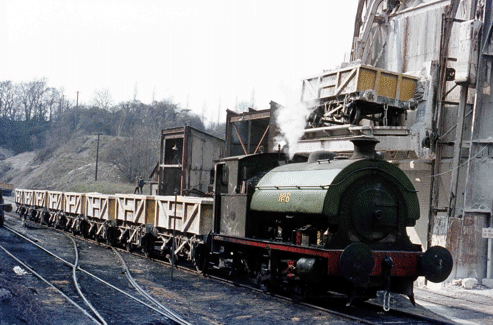 [Picture from the MRT's photo archive, taken by Ernie Brack]

In 1971, when the steam locomotives were replaced by diesels, APCM donated two of them for preservation, and No. 6 came to the Middleton Railway. It arrived on 5th June of that year, and the picture below shows it being unloaded from the low loader that had transported it to Leeds, onto the headshunt opposite the Parkside ground of the Hunslet Rugby League club.

The two sets of road wheels to the right of the picture were from the back of the low loading trailer, and once this had been jacked up then they had to be taken off to allow lengths of rail to be connected to the ones on the deck of the trailer, so as to form a ramp down which the locomotive could be run.  The diesel locomotive "Carroll" (HC D631) is waiting with a runner wagon, which would be run up the ramp to couple on to the locomotive, so as to control its descent.  Then "Carroll" would tow it up the gradient to Clayton's Dartmouth yard, which at that time was the railway's operating headquarters. 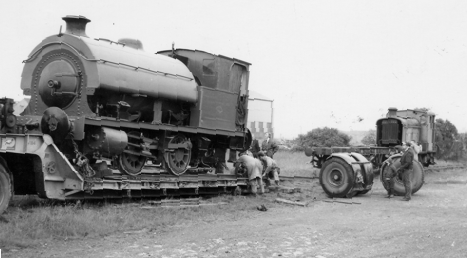 [Picture from the MRT's photo archive, taken by John Edwards]

Soon after its arrival, once the chalk had been cleared out of some of its fittings, No. 6 was able to enter service. Not long after this the picture below shows it being towed by "Carroll" along the new Dartmouth branch, which had replaced the old branch and the Parkside headshunt as part of the construction work on what is now the M621 motorway.  This construction work can be seen in the background of this picture.

Quite why No. 6 was not in steam on this occasion, or was needing to be towed by "Carroll", is not clear.  Presumably it had been on display for some purpose at the Moor Road platform, but we have no record of what that purpose was.  One speculation is that it might have been when APCM presented us with a plaque to be fitted to the rear of the cab.

[Picture from the MRT's photo archive, taken by Keith Halton]

For the next few years No. 6 played a major part in operating the railway's passenger trains, as shown in the picture below.  Here it is seen in 1972, propelling a passenger train across the footpath crossing at what is now the south end of our Moor Road yard. 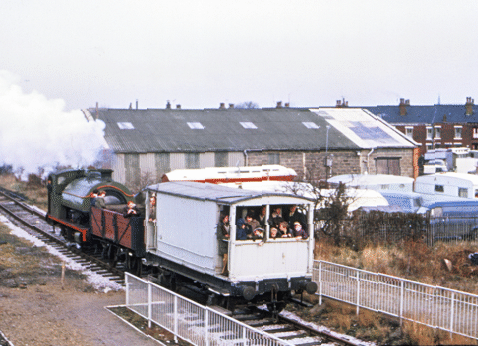 [Picture from the MRT's photo archive, taken by David Hebden]

No. 6 continued to operate until 1975, but at the end of that year it had to be taken out of service, awaiting an overhaul.  For various reasons this became a long wait, but eventually its turn came in 2001, and it was brought into the workshops.

As with any overhaul, the first stage was to remove the tanks and boiler cladding, and the saddle tank was placed in storage on top of one of the containers in the yard.  Then the boiler was lifted out of the frames, and work started on dismantling the chassis and running gear.  These required a lot of attention, but by 2005 the overhaul of them had reached a stage where it was appropriate to start work on the boiler.

This, however, was also the year when the complete remodelling of the Moor Road site began, along with the construction of the Engine House building.  These projects needed huge amounts of volunteer input, and so work ceased on the overhaul of No. 6.  Since then its chassis has remained in the workshop, with just occasional bits of progress being made, and the picture below shows it there, underneath the lifting gantry. 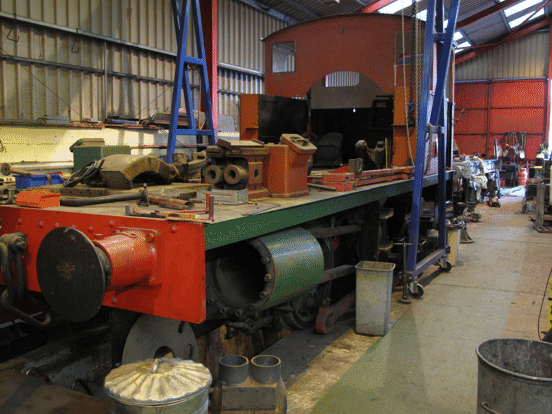 Meanwhile, inspection of the boiler had revealed that some major repairs would be needed, and advice on these was sought from Gordon Newton, formerly of the boilermakers Israel Newton and Sons.  He visited the railway during 2014, and gave advice not only on what work was needed, but also on how much of this our members could sensibly undertake themselves.  Specifically, he identified that on both sides of the firebox sections of the outer wrapper plate would need to be replaced, because they had been corroded by the hard water when working at Swanscombe.

The first stages in replacing these plates would be to remove the stays from the affected sections of the firebox, then cut out the centre sections of the corroded pieces of plate, and finally drill out the rivets so as to remove the rest of each part of the plate.  His advice was also that this was all work that our members could do, and that doing it ourselves would reduce significantly the cost of the whole overhaul, and so he gave us detailed instructions on how to do it.  We have now done all the work that he described, and the pictures below show the boiler upside down on a trolley, with the two corroded plates removed from the sides of the firebox. 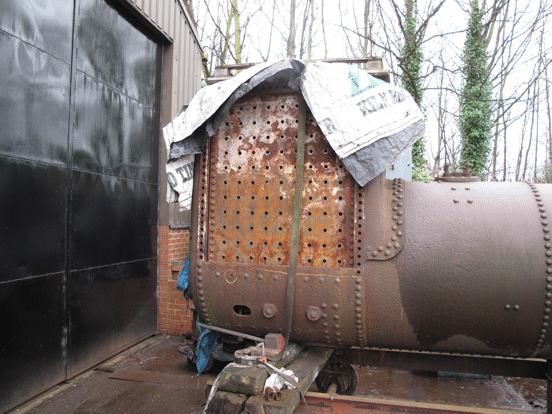 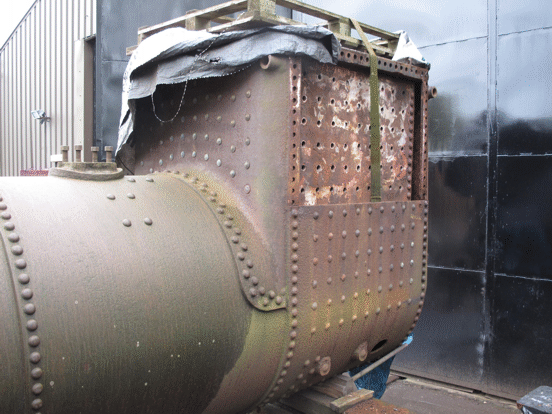 Our aim is now to return the locomotive to steam by 2020, when it will be 85 years old. As a minimum this will require new plates to be made and fitted, with new stays to replace the ones that have been removed. Then a new set of boiler tubes will have to be fitted. The work may also involve replacement of some of the firebox crown stays, but this still needs to be decided. Consequently, even though we have done as much of the work ourselves as we can, it was conservatively estimated that £60,000 would be required to do all of the work that is still needed in order to complete the overhaul of ‘No. 6’.

We have therefore launched an appeal to raise the funds needed to achieve all of this, and a separate page gives more details of this appeal.

Meanwhile, we have re-started work on the chassis of the locomotive, and a separate page describes the current state of the work to finish off the overhaul of No. 6.

The other pages that give more information about this project are therefore as follows: