Overhaul of "Brookes No. 1"

As part of a successful Heritage Lottery Fund bid, the Middleton Railway has embarked on a project to restore to working order Brookes No. 1 (Hunslet 2387 of 1941), illustrated below. This locomotive has seen service on the Middleton Railway in the last decade as both a ‘Thomas’ and in its authentic guise as a saddle tank.

This locomotive forms an important part of the Leeds locomotive building story and our history, having been built less than a mile from the railway.  Furthermore, it is the only surviving locomotive of its class (ie with 14" diameter cylinders), although there are a number of survivors of the larger versions (ie with 15", 16" or 18" diameter cylinders).  We hoped to see her return to traffic by 2017, and this was finally achieved at the end of August 2017 (on the Bank Holiday Monday).  These pages tell the story of her overhaul. 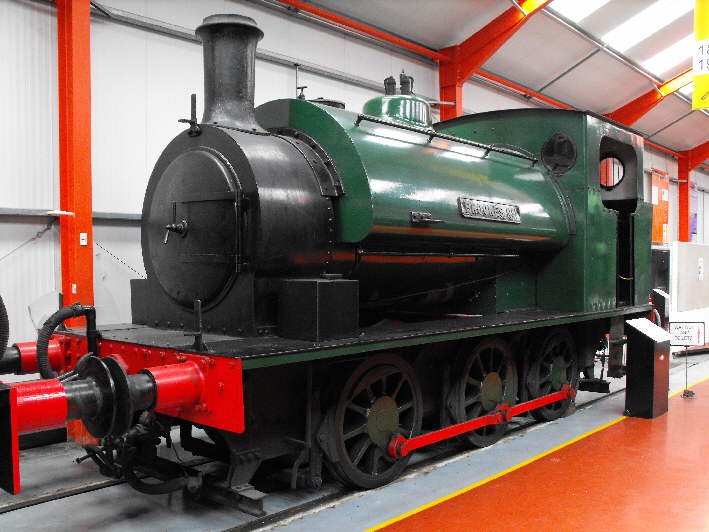 Our bid to the Heritage Lottery Fund was for a grant to acquire this locomotive, and also Picton (Hunslet 1540 of 1927), together with an archive of papers relating to them, and then to conserve both of the locomotives.  They had both previously been owned by David Monckton, who was a former chairman of the Middleton Railway Trust, and also the architect who had designed our Engine House building.  In the case of Brookes No. 1, conservation meant an overhaul to return it to working order:  it would have been nice if we could have done the same for Picton, but sadly that is not a realistic option.

Initial inspection carried out during the preparation of the bid suggested that the boiler should need relatively little work, as it was new at the start of the locomotive's last "10 year ticket" in 1999.  On the other hand, we could not rule out the possibility that some repairs to the boiler shell might turn out to be needed, and so a special contingency had to be included in the project plan to cover this possibility.

Consequently, the main focus of the overhaul would be on the chassis, which was known to need considerable work in many areas, including the expensive possibilities that we might find we needed to fit cylinder liners or re-face the slide valves.  The part of the overall project plan for the overhaul, as this was included in the bid, therefore identified the following 13 steps, plus a general contingency to allow for parts of the work taking longer than we expected.

Another of the main aims of the project was to develop the skills of our younger volunteers, so as to leave a lasting legacy for the future of the Middleton Railway.  As such, two other important parts of the overall project plan were firstly that we should document and interpret the work being done during the overhaul;  and secondly that in carrying out these various steps of the work we should arrange to instruct any of our younger volunteers in the methods that were needed.

In practice, as the project progressed it rapidly became apparent that we needed to be quite flexible in interpreting "younger volunteers" simply as "volunteers with limited experience", since many of our not-so-young volunteers turned out to have plenty to learn, too.  Thus, the various Mutual Improvement Classes and other training activities that were run in conjunction with this project actually involved instructing many of our volunteers in methods that were not already familiar to them.

The other pages that describe this project then illustrate the actual work that was done, although they do not need to break it down into the 13 steps listed above.  Rather, the actual work of the overhaul splits into three main phases, as follows.

Go on to the first phase of this project.