May 1968 was a significant month in the history of the Middleton Railway, as it saw the closure of Middleton Broom Pit, after more than 200 years of mining coal and transporting it into the centre of Leeds. To mark the 50th anniversary of this closure, the railway ran a special event on Saturday 29th and Sunday 30th September 2018, but activities surrounding this event did not just run for that one weekend. Rather, it was the focus of a much larger project, which was aimed at providing a proper commemoration of this change in the industry that had been key to this area of Leeds.

A separate page gives more details of this special event, but this page describes the rest of the project that surrounds it. This project was funded by Leeds City Council through its Community Wellbeing Fund.

In addition to the event, there were four main strands to the project, as follows.

These were produced by the team that had written "Bert's Tales of Middleton", but with additional people contributing. They were in similar style, and there were two versions of them. 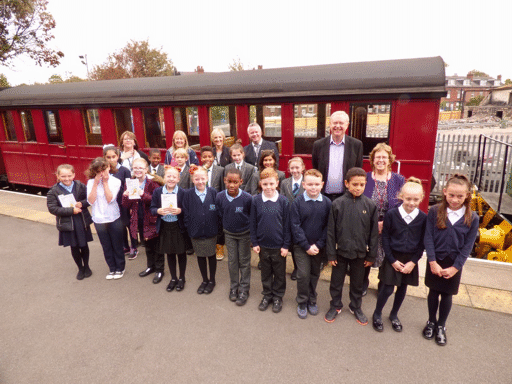 Councillors (Paul Truswell and Judith Blake), school staff, and children from Hunslet Carr and Windmill primary schools, at the launch of the booklets for primary schools on 14th September.

This draws heavily on available archive photographs and related material, including items from the railway's own archives. The exhibition was displayed in the railway's Engine House over the weekend of the special event at the end of September, and then during October it was at the St Georges Centre Community Hub, Middleton, and then at the John Charles Centre for Sport.  It then returned to the Engine House, and currently is on display there, but may be lent out to other locations in the future.

Did you work at Middleton Broom Colliery? Or do you have a relative who did so? Can you share memories of the colliery with us?

While the project was running we had set up a special email address, so that if anyone reading this page was willing to share memories,they could email us with their contact details, so that we could compile these memories for future generations to enjoy.  We have now closed down that special email address, but we would still be interested to hear from anybody with memories to share.

The plaque is a memorial that is dedicated to those who had worked at Middleton Broom Pit from opening to closure, and in particular to those who had lost their lives working at the Pit. The obvious place to install it would have been on the platform at Park Halt, since this is on the edge of what used to be the site of the colliery yard. Unfortunately, boards which have been installed there have suffered from vandalism to an extent that suggests that this would not have been a good location, and so the plaque was installed instead at the north end of the Moor Road site, where the railway line once continued into Leeds.

The plaque was unveiled on Friday 21st September 2018, and a separate page gives more details of it an of the unveiling ceremony.