The major part of the project to conserve Picton, which is financed by a grant from the Heritage Lottery Fund, is the construction of a building to shelter the locomotive from the elements, after it has been treated to prevent further corrosion of the metal.  This building is therefore known as the Picton Shelter, although actually it will have two parts, since as well as sheltering and displaying Picton it will also house at least one other locomotive, so as to guarantee that there will always be covered accommodation available for Brookes No. 1 if it needs it.

The Picton shelter is being constructed in the north-west corner of the Moor Road site, adjacent to the railway's car park.  This is where Picton stood when it first arrived at the railway, as illustrated below. 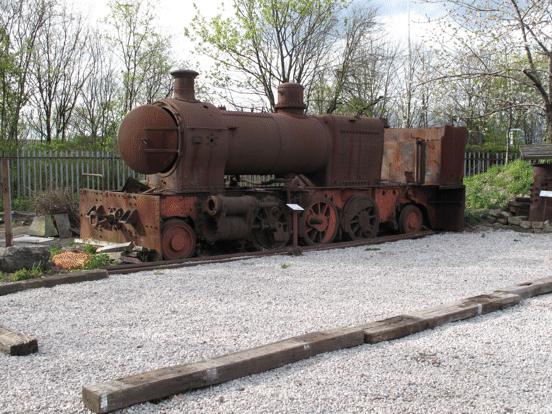 The track on which Picton is standing in the picture above is where the part of the shelter will be built that will house another locomotive under cover.  The area in front of Picton is where a new siding would be constructed, and then Picton would be craned onto this siding and will be displayed there.  For this purpose the part of the whole building that will house Picton will have a roof and ends, and a wall between it and the other part of the building, but the side facing towards the camera will be open.

The timber edgings that can be seen in the picture above marked the boundary between the site of the shelter and the car park, and were there to stop cars from parking on the area where the new siding was to be constructed.  This is because our volunteers had put a lot of effort into site preparation, and in particular preparing the ground for laying the track for the new siding.  In the right hand side of the picture can be seen an old firebox for a Sentinel locomotive, and before the shelter was built this would be relocated eastwards, along with a couple of other items that were at that time exhibited in this corner of the site.

Some aspects of the project to construct the shelter are linked in with the project to construct a Running Shed, particularly since the application for planning permission had to cover both projects, and so the delays with obtaining that affected both projects.  On the other hand the Picton Shelter is a much simpler building, since it does not require a pit or an oil separator, but apart from this the basic programmes for both projects are very similar.  Thus, most of the description of the Running Shed project applies to the Picton Shelter as well, and there is no need to repeat it all here.

Because of this, the advice that we were given was that it would be advantageous to also link the two projects when putting the design and construction work out to tender, and so the tendering process for the Picton Shelter had to wait while our volunteers built the pit for the Running Shed.  Eventually the two projects were put out to tender together, as is described in the page that records the progress of the Running Shed project, and indeed the same contractor was selected for both, namely Midbrook Steel. 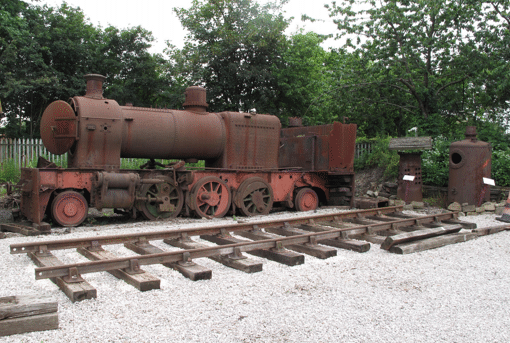 Having selected a contractor, our volunteers needed to speed up the rest of the preparatory work, and in particular needed to actually lay the new siding where Picton would stand.  This new siding is illustrated in the picture above.  Another bit of preparatory work was to check that Picton could actually be lifted safely off the track where it stood when the time comes to crane it across.  So, some jacking was done to test this, but when it came to lowering Picton back down again its rear end moved sideways by a couple of inches, which is why the the picture above shows that the rear wheels were no longer on the rails.  They would be once it was finally in place!

Meanwhile, we had been investigating the process of preparing Picton for spraying with preservative.  The advice we were given is that this will require a mixture of shotblasting and other rust removal processes, and that it will be best to leave this work until Picton is inside its shelter, so as to contain the debris that this process will inevitably produce.

The links with the running shed project meant that it suited Midbrook Steel to defer construction of the shelter until they would be coming on site to install the wall cladding for the running shed.  In the event this was delayed until the beginning of December, when their groundwork team arrived on Monday 5th to excavate for the foundations of the shelter, as shown in the picture below.  The yellow lines on the ground are nothing to do with the shelter construction, but indicate where car parking spaces had been! 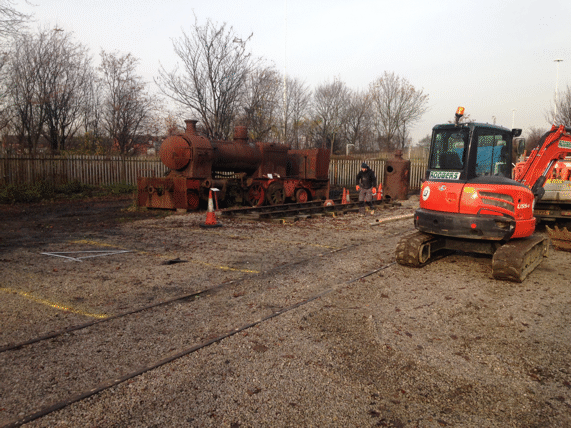 The first step in doing this was to mark out the site, and this was completed by the end of that Monday, as shown in the picture below, taken shortly before the safety fencing was put up round the site. The white lines indicate where the walls of the shelter will be, and the red lines mark the edges of the holes for the foundation blocks that will support the uprights for the frame of the shelter. 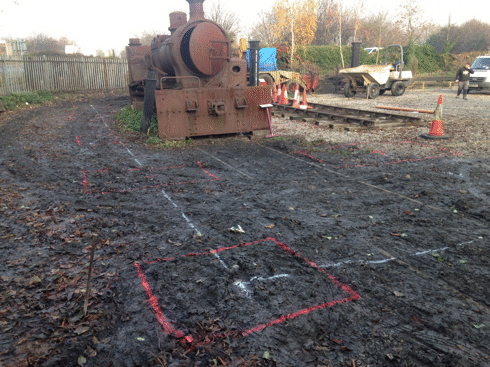 By the following Saturday the site had been fenced off, the excavations had been done and the concrete had all been poured, so that the foundation blocks were complete, although they had not yet had the brackets for the frame uprights fitted. The results are shown in the four pictures below, where Picton is still on the alignment of the back road siding, as it had not yet been craned onto the new siding. 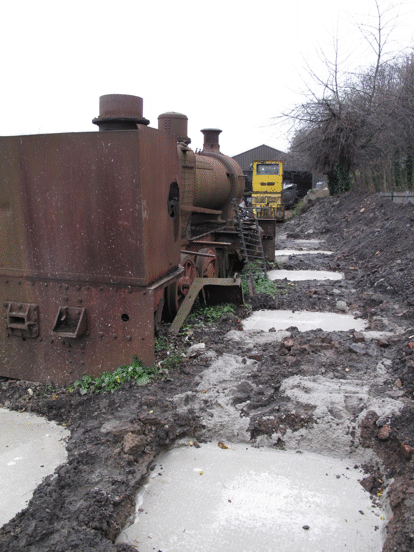 The picture above is taken from the north end of the site, looking towards the workshops, and shows the foundations for the west wall of the shelter building. 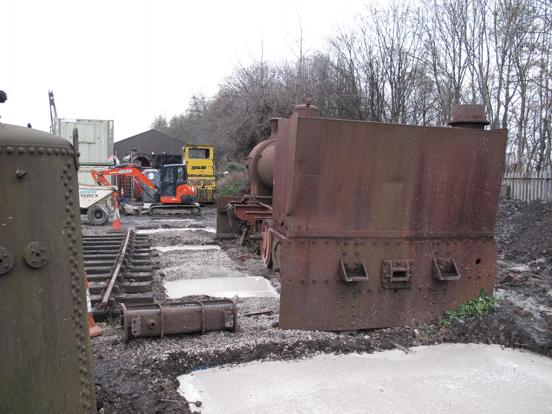 This is also taken from the north end of the site, looking towards the workshops, and shows the foundations for the centre wall of the shelter, which will separate the enclosed part of the building from the shelter itself. 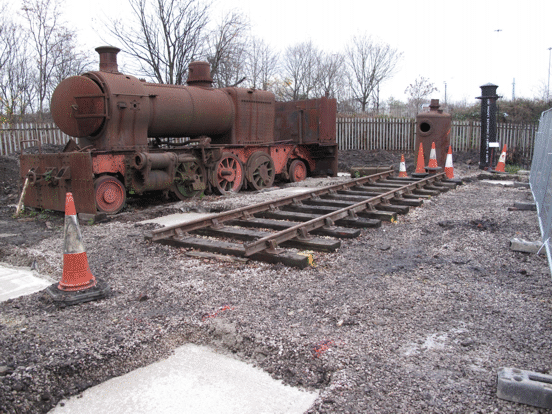 The picture above is taken from the other end of the site, looking northwards: the foundation block in the foreground is for the south-east corner of the shelter, and the equivalent for the north-east corner can be seen in front of the right-most traffic cone (which is not part of the construction work!). The objects beyond the Picton siding are the boiler from the Booth 2-ton crane, which will eventually be refitted to the crane, and one of the Saxby and Farmer gateposts. 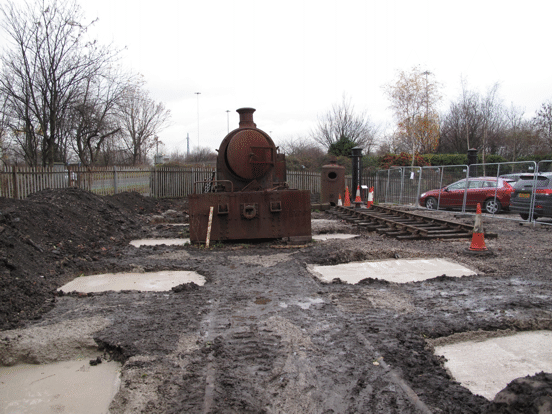 This is also looking northwards, showing the foundations for the west and centre walls of the building.

Following this we had to wait for the crane to be available, and it came in on the Monday of the week before Christmas (19th December).  As well as lifting Picton it was also being used to lift the two old steam cranes into place, and the picture below shows it starting to lift the Booth crane. 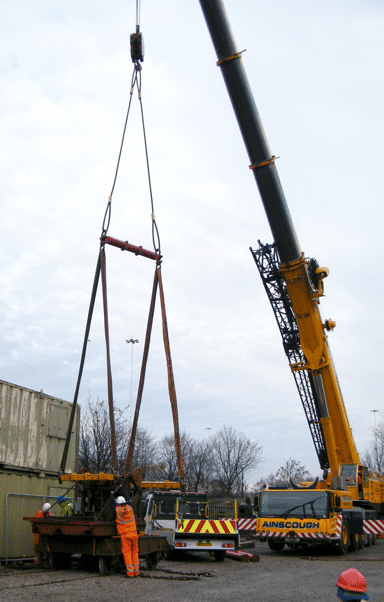 Once both of these cranes had been positioned then it was Picton's turn. The picture below shows it with all the slings in place for the lift, and Picton just an inch or two off the ground to check that the lift would be safe. 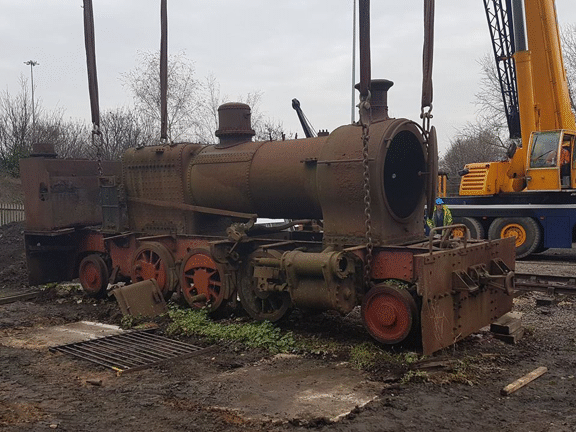 With everything safe, Picton was then lifted, as shown below. 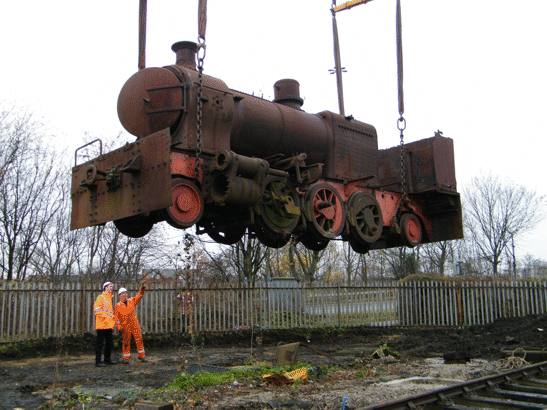 The crane then just needed to jib in, and Picton could be lowered onto its siding, as in the picture below. 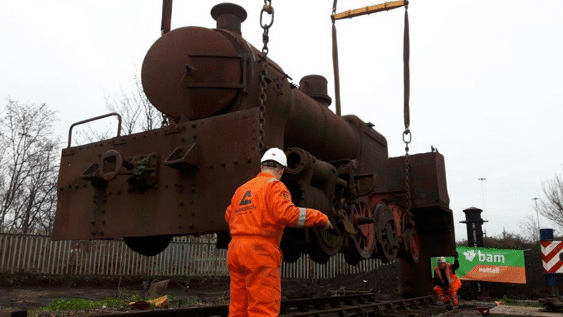 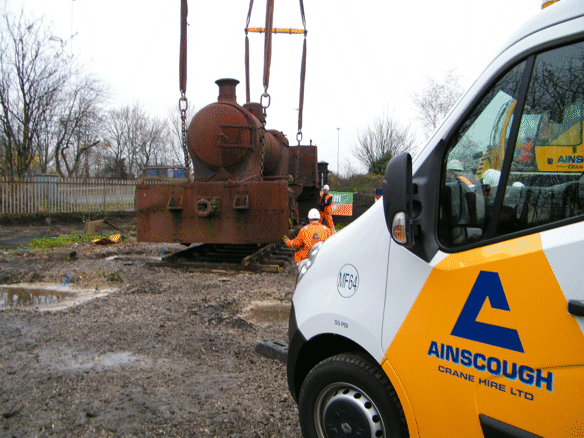 Finally the picture below, taken from the display area for the old steam cranes, shows Picton safely in place on its siding. 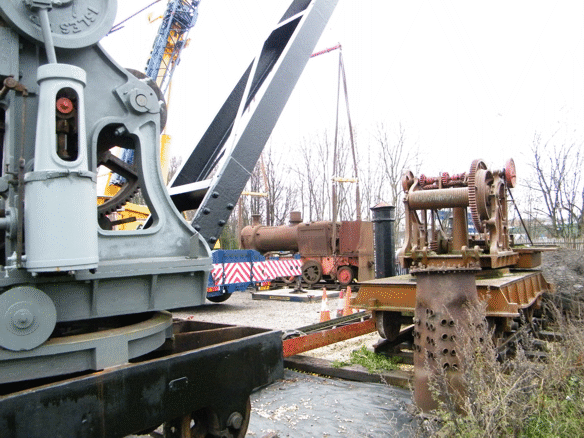 And here is a credit for the contractors who made such a good job of the lifting operations. 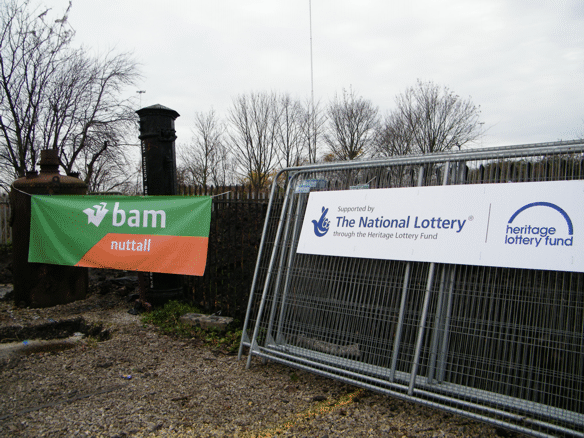 With Picton now on its siding the construction work could continue, and a separate page describes the progress of this.

Go on to the next stage in this project.

Return to the overall description of this project.

Other pages about this project: